Narrator: He took the bait.

There was a grand plan for today. It was:

It … seemed like a good idea at the time.

I got as far as step 3. Maybe even 3½. I made a few photos, including the lead photo above.

And then the rain came.

Or the … whatever the heck it was.

There was lightning. There was thunder. There were sheets upon sheets of rain. Then the rain started looking kind of white. I checked the car’s thermometer. 4 degrees. (That’s 39°F for you back in the States.)

At that point, I was no longer sure if it was rain, freezing rain, hail, or snow.

I tapped the brakes on the car. Not much happened, aside from the car bleating out a feeble warning that the road was slippery. (Fortunately, being used to things like that from my northern Minnesota upbringing, I was already driving very slowly.)

And that mostly defined the afternoon. You might understand my reticence to get out and make more photos. Getting struck by lightning and then freezing to death while getting pelted by hailstones somehow didn’t sound all that charming.

If you’ve known me for long, you know that borders fascinate me. Cyprus is particularly interesting, as it divided three ways: There is the primary Republic of Cyprus, there is Turkish-controlled Northern Cyprus, and there are some portions that remain under British control (military bases) following the independence granted to the rest of the island in 1960.

The border between British-controlled Cyprus and Cyprus-controlled Cyprus is even more subtle than the border between the Republic of Ireland and Britsh-controlled Northern Ireland. Google Maps showed me where the border was. I couldn’t find any evidence of it whatsoever. No customs. No mention of the change of control. Not even a “speed limits are different here” sign, as in the Irish case. Some distance in, there was a sign noting “British Forces, Episkopi.” And a bunch of signs saying “No photography,” which I respectfully observed. Perhaps the most subtle (crossable) national border I’ve yet to encounter. (Saying “crossable” reminds me that there is a fun case along the US-Canada border that I should post about someday. But not today.)

There is a new plan for tomorrow. Hopefully it doesn’t rain quite so much. 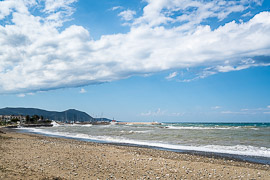 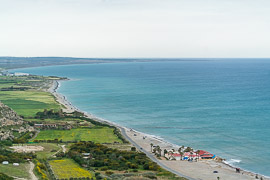