Many of you have asked if my Lightroom organizational technique has evolved since my 2009 article (no longer available). It has.

In this article, I describe some of my latest thinking on Lightroom organization. As with past versions of this article, I share my current practices here not because I want to preach that this is the One True Way to Organize Your Photos, but to provide a starting point for you in setting up your own Lightroom workflow. If this fits as a whole, great! If not, pick and choose what works for you and adapt the rest to meet your needs.

I’m writing this just as Lightroom 4 has been announced (congrats to my friends and former teammates!), but I’ve been using this technique for a while with Lightroom 3 and everything I write here should apply equally well to either version.

Several of you in comments on the 2009 article predicted that the multiple-catalog approach would turn out to be painful, and indeed it was. So now, having gone out and bashed on the idea of One Big Catalog, I’m now back to organizing my photography that way, and I’ve found a way to do it that satisfies the concerns I had raised back then.

Overview: What Goes Where and When

As I said I’m back to One Big Catalog, but it retains some of the key elements that I described in the 2009 article. Here’s a snapshot of my current Lightroom folders panel:

So what’s in these folders?

In my 2009 article, I listed some complaints with my previous system. Let’s circle back to those complaints and see how I’ve answered them in this new system:

As I mentioned before, photos initially land in the Edit Stage 1 folder. Here’s how the import dialog looks when I use it:

Let’s walk through the dialog and we’ll see why I choose each setting: 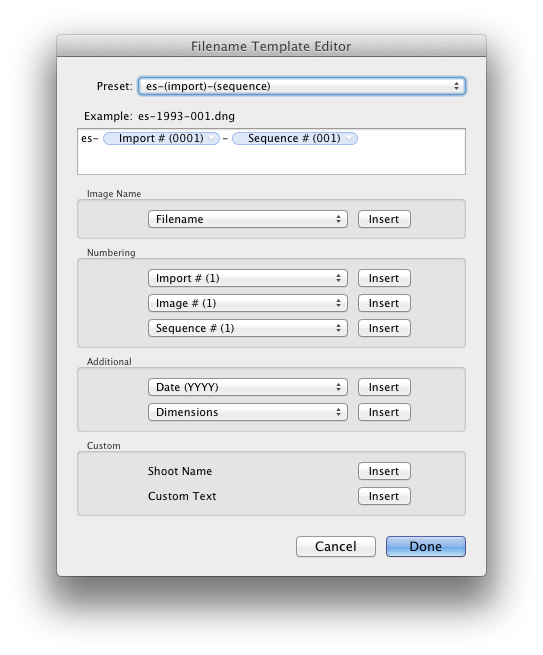 Typically photos live in this stage fairly briefly until I can add some very basic metadata to them. I don’t always perform these steps in the same order, but I always do each step for every photo:

At this stage, I’m not making much of an artistic judgement about the photos, I’m just trying to get some of the raw mechanics out of the way.

When I have a bit more time (sometimes the same day, sometimes many days later), I’ll organize them into folders that help me find them later. Since a lot of my photography happens when I travel, I often use the trip as an organizing metaphor. For those that are taken around home, I organize a bit more by subject. I encourage you to think about how and when you shoot; there may be be more important dividing lines for you than the ones I’m citing. Whatever the dividing line, I think it helps if it satisfies the following criteria: 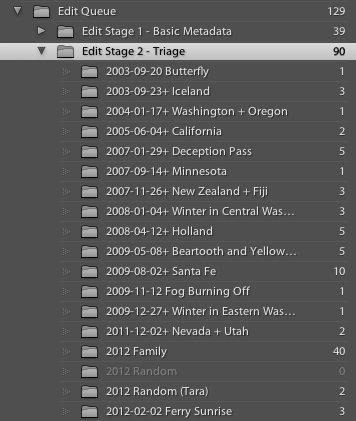 My naming criteria at this point is:

I also fill in the IPTC job field at this same time with the same name I’ve given the folder. You’ll see why a bit later.

The end result of this process is the photos end up roughly sorted by major subject area and ready for me to think through them more carefully when I have time.

What does require careful thought is deciding what photos make it out into the public eye. I shoot a lot of duplicates and a lot of variations on a theme until I get to something that makes me happy. Typically I share 1-2% of what I shoot; as you can imagine, it takes some effort to make those cuts.

I use color labels to indicate a final decision about each photo’s fate. Once a photo has a color label, I’m stating that I’m done with the editing process for that photo and it’s ready to leave the edit queue. The color labels I use are as follows: 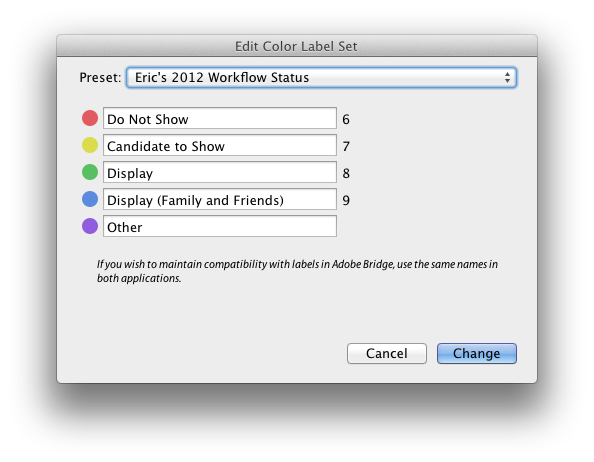 I start by looking for quick and obvious outtakes. These are the photos that passed the “obvious crap” filter from stage 1, but just don’t have the oomph to be something I’d like to share with the world. I use a filter called “Anything But ‘Do Not Show’ or ‘Candidate’.” (Download my filter presets here.)

The nice thing about this is that I can quickly zip through photos, culling them by pressing 6 (crap, but I don’t want to delete it) or 7 (meh). The moment I press a key, the photo disappears from the grid or loupe view and I’m on to the next one. There are many variations on this approach (many use pick flags or star ratings). I happen to like this approach, but the others are perfectly valid.

Eventually I’ll whittle the initial set of photos down to one or a handful of photos that I think have some potential. On those photos, then I’ll spend the time in the Develop module to polish them as I see fit, and then I’ll assign the green or blue label (“Display …”) to those photos.

Clearing Out the Edit Queue

The goal of the edit queue folder is to be a temporary working space until I’ve done my editing and developing work on my photographs. Once I’ve completed that work for a reasonably large batch of photos, it’s time to kick them out of the nest. Usually I do this for several days’ worth of photos at once, so I don’t have to spend as much time on it. I usually do this when I’m at home when my backup drive is readily available. If I’m away from home, I’ll let the photos live in the edit queue until I’m back home.

Here again, I use library filters (again, download my filter presets here) to make this job easier. This time, I’m looking for those photos that do have specific labels. So, to move the good photos into the Display folder, I’ll look for those with the green label and move those into corresponding folders in the Display tree. I add a small bit of extra hierarchy here just to keep it from getting too big, like this: 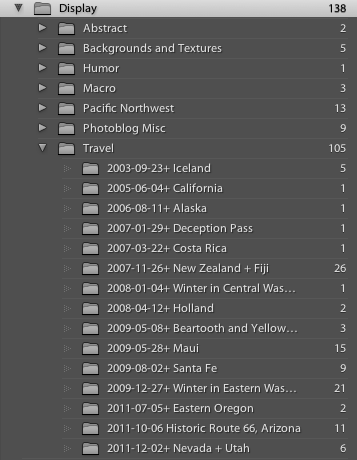 The details aren’t important — and, of course, will depend on what you shoot — but the important thing is to keep a reasonable number of folders at each level. And, of course, I repeat the same thing for the “Not for Display” photos.

This looks a lot like the Incubator to Selects step from my 2009 workflow, except that I’m no longer doing the import and export catalog work. It winds up giving me nearly the same effect with a lot less work, and it works well if I decide to re-process a photo (which I’ve been doing a lot of lately).

For the most part, I’m able to find the photos I want just by browsing the Display or Edit Queue folder trees or by using other filters in the metadata browser. Occasionally, however, I do want a roll-up of photos that are located in different places. In those cases, I use a smart collection like this: 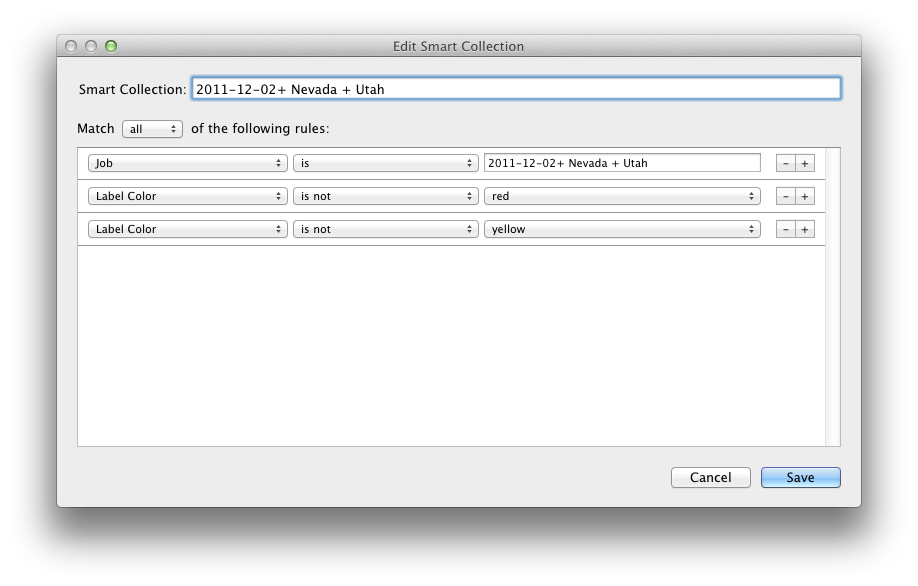 This smart collection shows me all of the photos from my recent trip to Nevada and Utah (this is why I populate the IPTC job field) that are either marked for display or not yet marked at all (i.e. still in edit queue).

I hope this article was helpful to you. I know the comments in previous versions of the article were helpful and thought-provoking for me.

Thank you for reading!