I’m back from my amazing trip to South America. Having had a few days to rest and catch up, I thought I’d share some reflections on how it went.

Knowing that I had some lay-low time after the trip (i.e. now!), I pushed for an agenda that was intentionally ambitious and nomadic. Neither Tara nor I had seen any part of South America prior to this trip and, being the curious people that we are, we wanted to see as much as we could in the time we had available.

Some thoughts about each of the places we visited along with the photoblog posts they inspired: 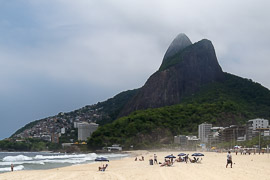 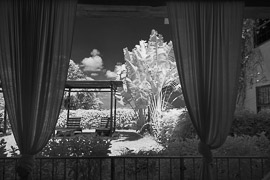 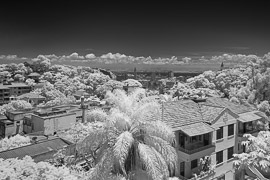 I think of Rio as a study in contrasts. You can’t get around in the city without seeing the favelas, home to so many who have no obvious hope for escape. And then there are amazing little corners of beauty. I spent the first couple of nights in the Santa Tereza neighborhood (Hotel Santa Tereza, a last minute find, was expensive but gorgeous) and enjoyed the little coffee shop / restaurant around the corner (2017 update: sadly, now closed) so much I went back the second night I was there. 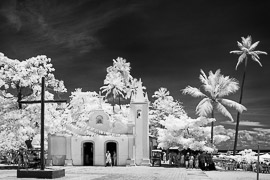 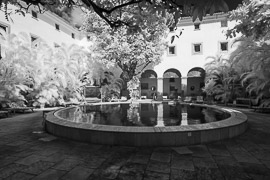 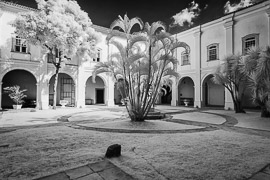 The Salvador leg of the trip was a last-minute improvisation. Salvador is Brazil’s third largest city. I stayed in a 16th-century convent that has been lovingly restored into a boutique hotel and absolutely adored it.

The hotel is on the edge of Salvador’s historic Pelourinho district, which was both a blessing and a curse. A blessing because there was a lot of interesting subject matter to shoot within easy walking district. A curse because everyone warned me that I needed to be hyper-vigilant due to the high rate of street crime in that area. So I took relatively short walks in daylight in areas I came to know and feel safer in. Being a very fair-skinned person with an expensive camera around my neck definitely made me feel highly visible.

I took a day trip to Praia do Forte, about 80 km / 50 miles east of Salvador. It was crazy hot and humid that day (about 37°C / 98°F with humidity to match, I think). It’s definitely a touristy resort, but still offered some interesting sights and a welcome contrast to the urban center of Salvador. Some of my favorite infrared photos are from there (Fireworks at Noon and Someday My Ship Will Come In).

A side note about hotel safes: They may not be all they’re cracked up to be. My friend Anne Archambault wrote on her blog, “Why using a hotel safe may just be pointing thieves to your precious valuables.” Almost exactly the same thing happened to me here. In my case, the safe was battery-powered and the battery failed while the safe was locked. I got a similar demo of how easy it is to open a safe with a crowbar. (It took five minutes here, not two, but still … not exactly reassuring.) A couple of days later I noticed that an unlocked iPhone I had carried with me for use later in the trip was missing (and also got a notice that a Brazilian phone number had tried to connect to my iCloud account). The last place I know I had the phone was in the safe that had been opened. It’s certainly possible I fumbled it later in the trip (I am known for acts of forgetfulness!), but I have to wonder if the phone was swiped during that exercise or later during my stay. 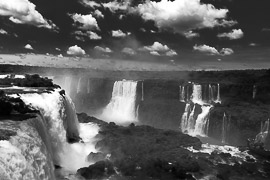 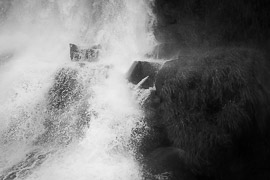 Wow isn’t enough for this place. The name Iguazú is adapted from an indigenous name meaning “big water.” That still isn’t enough to describe it. The important thing to understand when looking at any of the photos I’m showing here is that they each represent a small portion of the falls.

Look closely at the first of these photos (Iguazu Falls) to see the full-size picture. See those little white specks in the lower right corner? Those are people standing on an observation deck far below where I was standing. Getting a sense of scale yet?

On our second day in Montevideo, we decided to go for a drive in the countryside. I haven’t worked up any of the photos from that tour yet, but we were struck by the resemblance to the rolling hills of midwestern farm country. Aside from some differences of building style, we could easily have been in rural Minnesota or South Dakota.

Punta del Este is an upscale resort community about a two-hour drive from Montevideo. It’s obvious as you drive into town that this is where the money flows to in Uruguay. There are miles upon miles of gleaming towers of beach-view condo buildings, probably catering to wealthy foreign visitors or immigrants. Aside from the roads being a little rougher and (some of) the signs being in Spanish, you could easily fool yourself into thinking you were in an American resort community.

There’s an interesting halo effect, though, in that the coastal communities for 50 km / 30 miles or so either side of PdE have a very nice relaxed but still upscale feel to it. Or at least it did when we were there – we intentionally missed the “high season” of January.

The lighthouse picture above was taken in the quiet fishing village of José Ignacio, about 30 km / 20 miles northeast of PdE. I joked to Tara, “Welcome to Mendocino,” as we drove into town (a reference to Mendocino, California, one of our favorite hangouts when we can find a bit of extra time in the Golden State). I’ve since learned that José Ignacio leads a double life as a celebrity/socialite getaway in January, but there was almost no sign of that when we were there in early December.

And now for something completely different!

If Punta del Este is everything modern and hip in Uruguay, Colonia is everything historic and quaint. The center of the city has been designated as a UNESCO World Heritage Site and still maintains much of what I have to assume was its original feel. I really enjoyed the historic district. The photo above is just one of many I enjoyed from there. Stay tuned: I have more to share as I have time to sort through them.

We stayed at the Costa Colonia Riverside Hotel on the north edge of the historic district. For all the historic flavor of the city center, this hotel was obviously a recent construction: very trendy, but enjoyable. We had a nice view out over the Río de la Plata.

Not a lot to say about Buenos Aires since we had only a day here and it was Tara’s last day on the trip. We heard a lot about BA and I think we would have enjoyed more time there had it been feasible. Some other trip, I hope.

And now (again) for something completely different! The flight to El Calafate marked my respite from the heat and humidity of the first two weeks (and for this cold-blooded northwoods boy, that was a very welcome change indeed!). El Calafate is a clean, quiet town in far southern Patagonia with something like 22,000 people – and almost no development to speak of beyond the city limits. The highlight of the trip was a tour of El Perito Moreno glacier, pictured above. 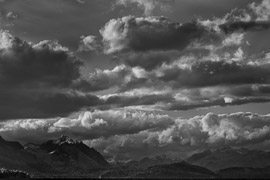 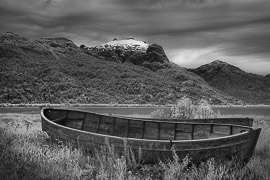 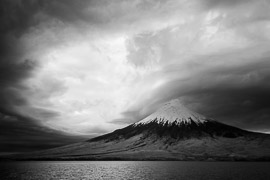 If you’re ever in the mid-Patagonia region, I highly recommend finding a day or two for the Andes Crossing. The trip connects the two lake resort communities with a nice combination of bus and boats through relatively undeveloped mountain country. If I had it to do over again, I’d have taken the two-day option and spent the night in the quiet village of Puella, Chile. On the one-day trip, we stopped there for lunch (great hotel/restaurant). The boat picture above is from Puella.

I didn’t get much chance to explore Puerto Varas, Chile, where I spent the night, due to a heavy, heavy rainstorm, but I think I would have liked it a lot. I found people (taxi drivers, hotel staff, restaurant, etc.) very friendly and very helpful. The city was unusually clean and orderly as South American cities go.

I had a 6-hour layover in Santiago on the way from Puerto Varas to Ecuador, so there wasn’t a lot of time. I did hire a taxi driver to take me round-trip from the airport into the city and back. No blog-worthy photos from that brief tour though. 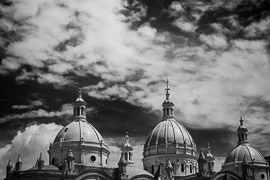 After a brief overnight in Quito, I flew down to Cuenca for a couple of days.

Cuenca’s old city retains a lot of its historical flavor, both in its building and also in its people. I especially enjoyed the chollas, older women of the traditional communities surrounding Cuenca who come into the city to sell various handmade goods and produce. I regret that I didn’t quite capture a suitable picture of a cholla. (A few that I saw were reluctant to have photos taken.) The woman above was working in a market, but wasn’t quite dressed in that traditional style.

I met this woman on the streets of Quito this morning. She was selling handmade scarves. I didn't notice her little assistant sticking his hand out from under a scarf until I was back editing the photo this evening!

This stage of the trip was just a few days before Christmas. Cuenca, being a very, very Catholic community (96% according to my tour guide) was in the throes of celebrating the holiday. My first full day there was the last day of the school year and so I was treated to lots of parades in which students of all ages were marching from church services back to the end-of-year party at school. (Many schools there are church-run.) The parades were very elaborate, with heavily-decorated cars and trucks and marching bands. Parents and grandparents would stand on the sidewalk and watch the parade and police blocked traffic as each parade passed.

My second day in Quito (and the last full day on the trip) was the Saturday before Christmas. As you might imagine, the city was completely overrun with last-minute shoppers and I think having a car would be a curse on that day. It was difficult enough to navigate the city on foot. Unlike typical US cities, the “market” is largely conducted outside with street vendors in booths and impromptu tents along the sidewalks. I was warned against walking alone with expensive camera equipment especially on that day, so I settled for iPhone pictures and videos of the pedestrian chaos. (Maybe someday I’ll share some of those.)

Quito and Rio share honors for most badly run airports I experienced in South America. My flight from Santiago landed about an hour later than scheduled, which meant its arrival coincided with two large flights from the US. It took over an hour from walking into the terminal to getting my passport stamped and almost another hour to get my luggage cleared. Given that this all started at 11pm, I was a bit grumpy by the end of the process. (There was a similarly lengthy delay upon entry to Rio.)

Where Would I Go Next?

Lots of people had suggestions for other places I should have visited on this trip. In no particular order, these come to mind should we decide to make a South America Trip #2:

Some of these were just the painful sacrifices one must inevitably make when setting a time and dollar budget for a trip. Some I just didn’t know enough about beforehand.

No trip of this scale would be possible without some important contributions from key people. A big think you to …

← Slow Photography Seeing Red and Loving It: Mirrorless vs DSLR for Infrared →